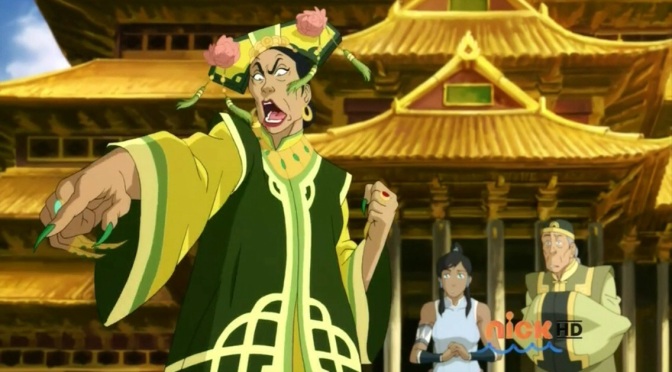 The premiere consisted of 3 parts: A Breath Of Fresh Air, Rebirth Of A Nation, and The Earth Queen. I’ve already covered the first two, so now it’s time to wrap it up with the third part, which is probably my favorite out of the three.

Team Avatar travels to Ba Sing Se to search for new airbenders, and as is the Ba Sing way, they can’t do anything without the Earth King’s, or in this case, Queen’s consent. While Korra is licking the Queen’s boot, Bolin and Mako try to hunt down a rogue Kai. Will Korra get what she wants by helping the Earth Queen get what she wants? Will Kai ever shape up? Absolutely! How could anything go wrong in such a marvelous city?! 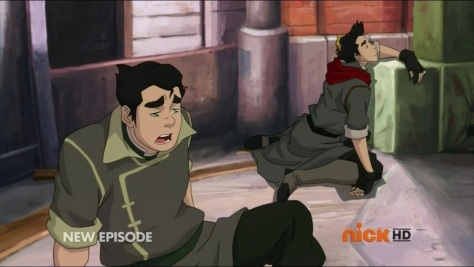 Is This A Good Place To Start?

Nope. There is a “previously on” sequence in the beginning, but it won’t give you a full understanding of what’s going on. With a show like this, it’s recommended that you start from the beginning.

A great episode that brings us back to the oh so bittersweet city of Ba Sing Se (so beautiful, yet so cruel). Fans of the original series will swoon over the music that just screams nostalgia. Action and comedy are well balanced yet again. This 3-episode premiere should be enough to hold us over until July 11th.

My Final Verdict (With Spoilers)

Holy poop. Just that one scene of Bolin and Mako’s grandmother bowing to the portrait of the Earth Queen has me believing that Ba Sing Se has become a sort of totalitarian society. I thought Ba Sing Se was creepy in The Last Airbender, and I have a feeling I’m gonna be getting similar vibes in The Legend of Korra.

Kai seemed to be doing pretty well for himself, showing off just how his airbending was quite the upgrade to his thieving abilities.

That is until the Dai Lee showed up.

And forced him to be a part of some secret airbender army. Gotta hate those f***ing Dai Lee.

On another note, we had a group of barbarians who claimed to be trying to reclaim the taxes for the people. Geez, the Earth Queen doesn’t seem to be a very nice lady. You know, I think she just needs some advice from the former Earth King. Get a bear. They solve everything.

Also, this fruit stand lad who looks like he belongs in Street Fighter kept cracking me up. Is this our new Cabbage Guy? 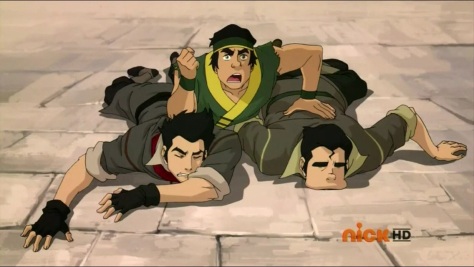 Zuko’s line about how he once hired “Combustion Man” to kill Aang was probably the most satisfying reference to the original series, by the way.

So I thought this was a really good episode. I’m very interested in this “secret airbender army”, and I really hope it leads to Korra and the gang ending the Dai Lee once and for all.

What did you think of the episode? Did it leave you looking like you just came back from a relaxing stay at Lake Logai? Or perhaps it made you feel crummier than a rotten fruit stand? Let me know!

Did you enjoy this little ramble? If so, consider following The Critic’s Canvas for all your critical needs.

So so sorry to everyone who was expecting my review of The Legend of Korra episode “The Earth Queen” today. It just so happens that started feeling horrible last night and it carried over to today, and it doesn’t help that even though I’m sick, I still have to work on classses. I’ll try my bestest to get it up tomorrow. Sorry for the inconvenience.